Intraday trading is the best business on this planet. You don’t require land or labour. You just need small seed capital and within no time your business can be fledging with success.

Its just you and your trading terminal. But despite all these benefits a lot of people aren’t able to sustain for too long in day trading.

It is said that 90% of new traders lose 90% of their starting capital in the first 90 days of trading. If you don’t want to end up amongst these traders then you must read this article till the end.

Now what could be the reason behind quick failure of such a large number of traders?

Several traders enter in to the markets with big dreams but exit quickly because they don’t have a definite trading strategy.

They don’t have a proper entry or exit plan. Their trading is based more on impulses rather than logic.

Most of them trade on the basis of free tips received on social media and TV channels. A couple of them even trade on gut feel.

If you are trading based on any of the above things then you don’t have a strategy which can be tested, measured and improved. That’s the main reason why majority traders lose money.

I’ll first explain the concept of moving averages before I explain these three types of intraday trading strategies.

Look at the table below where I have calculated a 5-day simple moving average (SMA).

If the price is trading above the SMA it is considered an uptrend. If its trading below the SMA it’s a downtrend.

The location of current prices with respect to moving average helps us determine the nature of the trend. It also helps us decide the kind of strategy which will be suitable depending on current market environment.

Now let’s check out the three types of intraday trading strategies which one could build with the help of moving averages.

You can notice a 15-minute intraday chart of Nifty. I have plotted a 40 period SMA on the chart. This means that instead of daily closing prices we are using 15-minute closing prices to calculate the moving average. 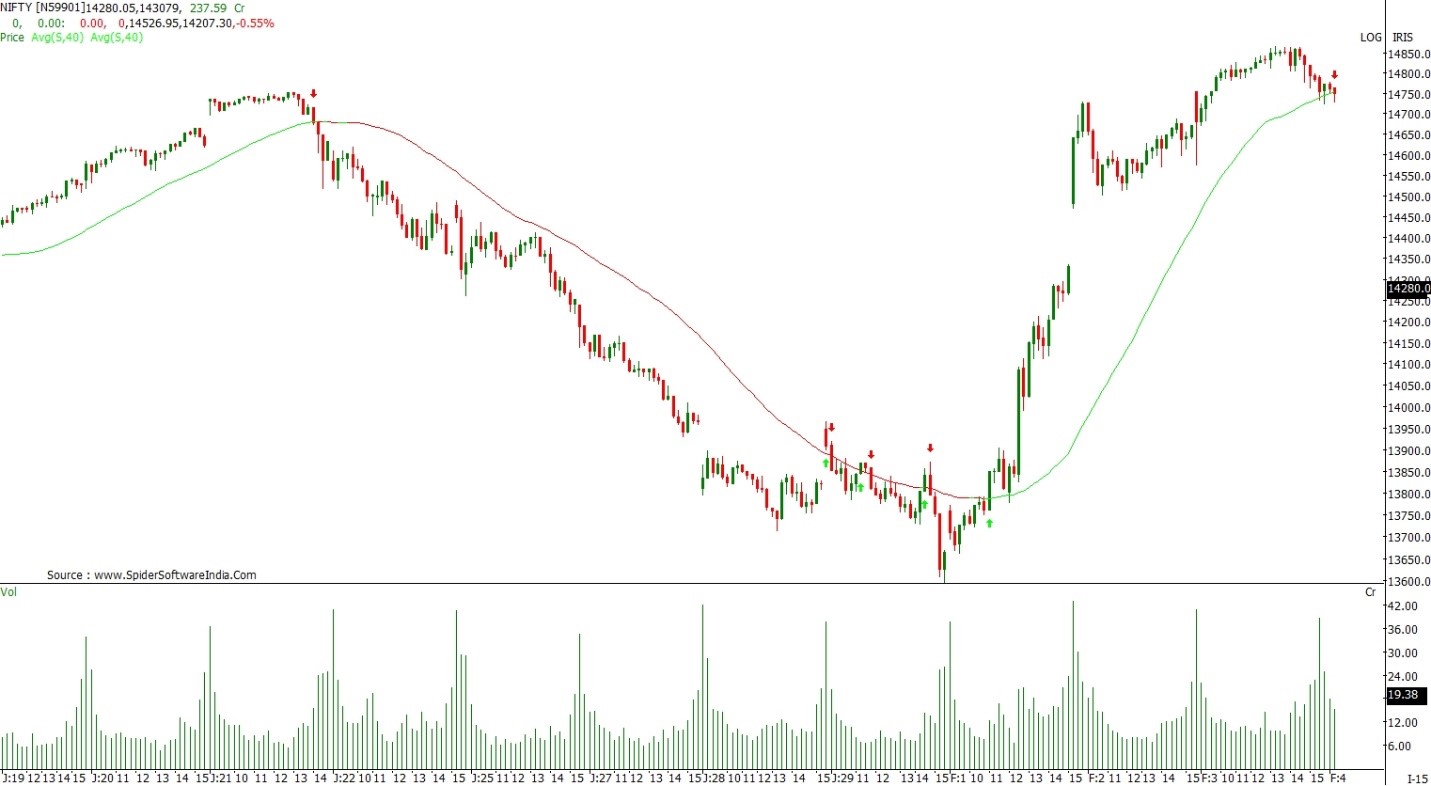 You can notice Nifty breach below the moving average on the top left corner. I have marked this breach with a red arrow pointing downwards.

Nifty trended lower for a long time. It crossed above the moving average before giving a few false signals. Such false signals are part and parcel of a strategy. You may reduce them but cannot eliminate them completely.

When Nifty breaks above the moving average it’s a bullish signal. Both the bullish and bearish signals could have helped you capture a move of about 900 points each on the Nifty. Such moves could result into profits of Rs 65,000 per lot on Nifty futures.

When you trade in the direction of the trend it is called trend following. Moving average is just one amongst several ways to apply trend following strategies in the market.

Here’s another chart of Nifty from completely different period. This is a 75-minute chart. I have plotted a 20 period SMA. I have also plotted bands 2.5% above and below this average. 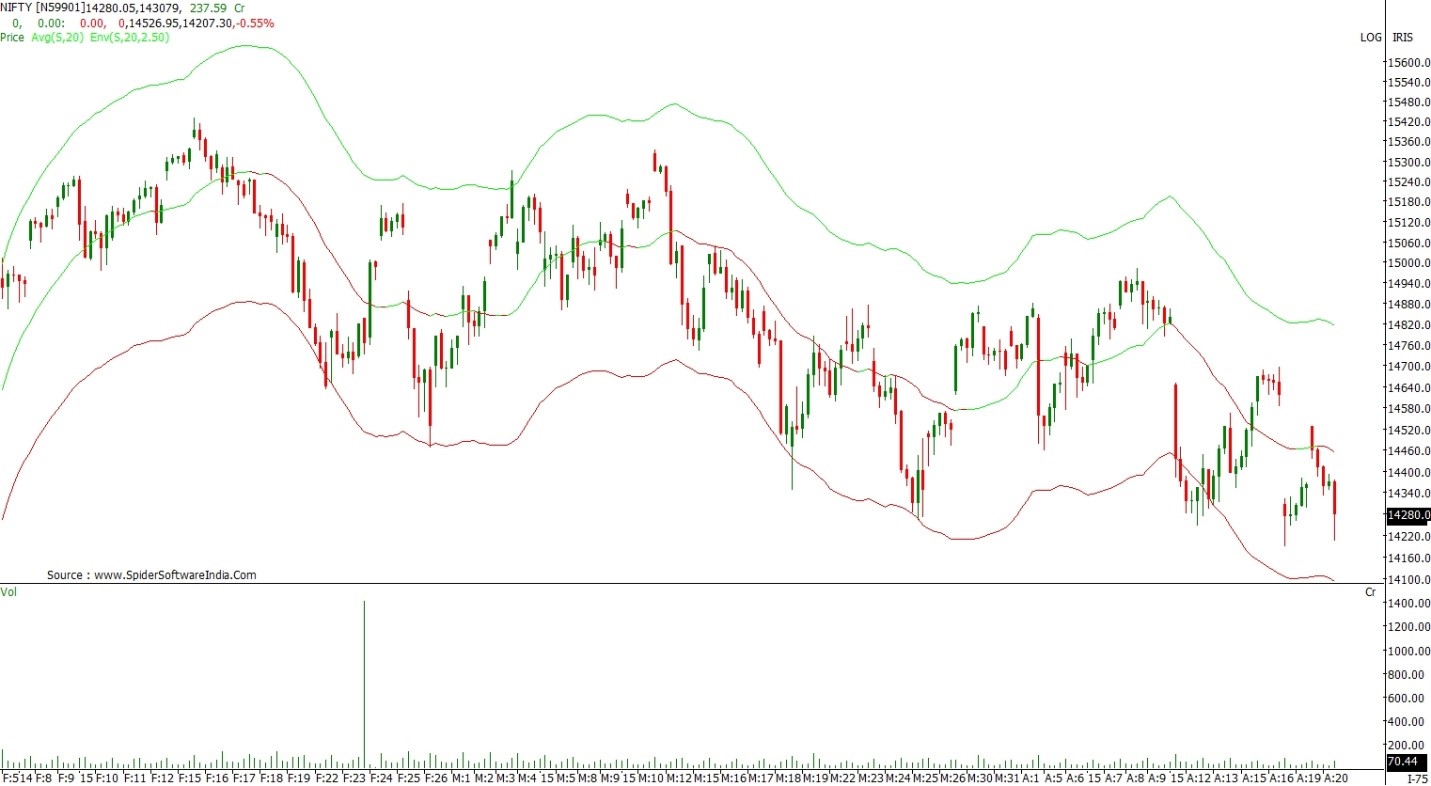 You can notice that the index is drifting lower gradually. However, it doesn’t fall in a straight line. It finds support near the lower band and bounces back. It even touches the upper band once during this whole period.

Traders could use these bands to trade in Nifty. Whenever Nifty touches the lower bands one could buy it in anticipation of a bounce back.

This bounce could last till Nifty touches the SMA or till the upper band is touched…doesn’t matter. What you are focusing on is trend reversal once Nifty touches either of the bands.

When you trade against the direction of the ongoing trend it is called as mean reversion trading.

Generally, its observed that prices don’t trend in one direction for a long time. Whenever they have stretched far away from the mean you can expect a reversion.

Here’s a detailed video of a mean reversion strategy using candlestick patterns. You can watch this video and learn How to Find Stock for Intraday Today.

Here’s a different chart of Nifty. It’s a 10-minute chart along with a 30-period moving average. 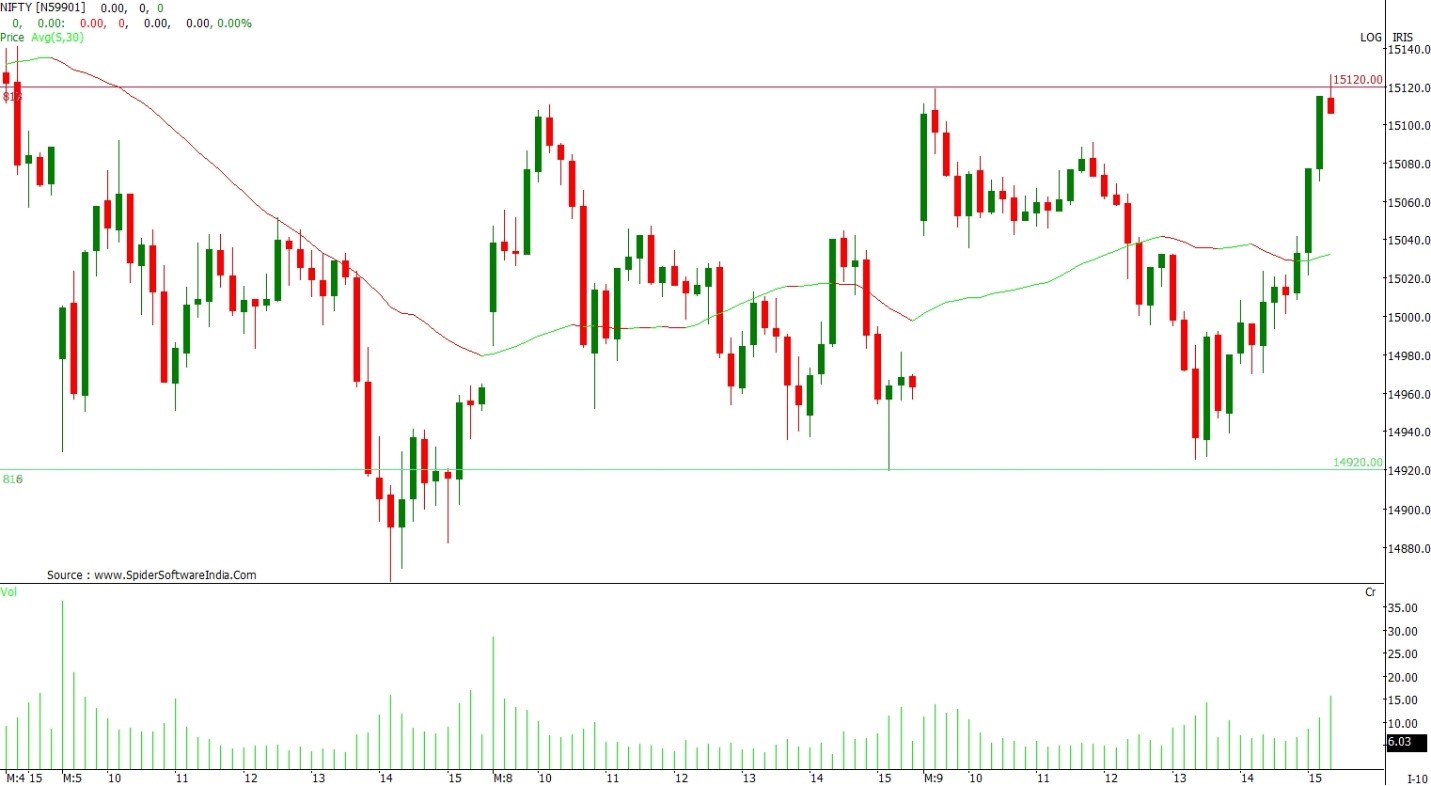 In the above chart you will notice that the index is trading in a sideways range of 14,920 to 15,120. The moving average line flattens out after the initial fall.

During this period the index doesn’t have a clear-cut trend. So, you can’t use a trend following strategy.

It is also not stretching far away from the mean. Hence, a mean reversion strategy will also not work here.

When there isn’t any specific trend in the index it is known as a sideways market. It could be difficult if you don’t know how to identify these ranges.

So those were the three types of trading strategies that every trader could use. Although it looks simple, but it can be challenging if you don’t know to identify the market environment. For example, you won’t make money if you apply a trend following strategy in a sideways market.

Similarly, if the market is in a strong up or downtrend. You would lose big money if you implement a mean reverting strategy.

Thus, one must be able to identify the market environment precisely and implement a trading strategy accordingly.

A lot of traders don’t know how to do this. This is one of the main reasons behind their failure. But we won’t let this happen to you.

Samco to the Rescue

Samco has been at the forefront when it comes to providing innovative solutions to investors problems.

It did this first by offering flat 20-rupee brokerage irrespective of the quantity traded. When retail investors were paying percentage brokerage through the nose Samco offered massive discount on brokerage.

When retail investors were overwhelmed with more than 3,000 mutual fund schemes and only a few were beating their benchmark. RankMF broke the clutter and identified the right mutual fund for you by evaluating every stock in its portfolio. Till date nobody in India does this.

When Portfolio Management Schemes (PMS) went out of common man’s reach. Samco launched StockBasket which offered similar services that a portfolio manager would give but at miniscule cost.

We are doing this again with KyaTrade for common retail traders. KyaTrade is a platform which provides high conviction fresh trading ideas at your finger-tips.

It scans millions of data points and hand picks stocks based on the three trading strategies I described above. It choses stocks which are likely to do well in the current market environment. So, you can be rest assured that the trading ideas offered to you have high probability of success.

That’s not all. It comes with complete risk management system too. Each trading idea comes with a pre-defined target and stoploss. So, retail investors don’t have to worry about exits.

It inculcates a sense of discipline in trading with proper position sizing. This is a missing element for most traders. KyaTrade is a much-needed solution for retail traders.

It offers a simple and easy way to make money from the markets to retail traders. We are certain that once you use KyaTrade you will be hooked up to it and not feel like going anywhere else.

Considering all these benefits that KyaTrade offers we would have priced it upwards of Rs 50,000 for its intraday plan. But we decided to price it at a reasonable rate of Rs 18,000 per year so that maximum traders could use it.

The good news is that you won’t even have to pay Rs 18,000 if you act now. Only for a limited period subscription to KyaTrade’s intraday plan is available for Rs 9,000 only. Isn’t that awesome?

What are you waiting for? Still have doubts?

Here’s the deal. If you are still skeptical about KyaTrade then we are giving a virtually FREE trial for a month.

Yes! You can try KyaTrade for just Re 1.

It can’t get any better than this now. So don’t wait sign-up immediately and enjoy instant trading ideas at your fingertips.

Was this article helpful?